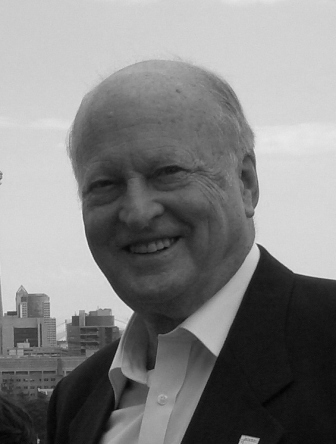 GenderInSITE is paying homage to Prof. Geoffrey Oldham, one of the initiative's founding partners and a member of the GIS Steering Committee from 2011 to 2017.  Prof. Oldham passed away on October 1, 2017, and his life and achievements are being celebrated at many institutions to which he contributed during his lifetime. GenderInSITE adds its voice to these tributes, with texts below from Sophia Huyer, Alice Abreu, Shirley Malcom and Roseanne Diab.  GenderInSITE will be happy to include other contributions, which should be sent to info [at] genderinsite.net.

GenderInSITE also interviewed Geoff in 2016 to find out more about the origins of his and other colleagues’ work on gender and science and technology. The interview is available below the texts.

Sophia Huyer, Director of GenderInSITE from 2011-2015 (with input from Bonnie Kettel, past Director of the Gender Working Group, UNCSTD​):

Geoffrey Oldham was a pioneer in global gender, science and technology and remained a leading voice on the topic for the rest of his life.

He was a major driving force behind the Gender Advisory Board of the United Nations Commission on Science and Technology (UNCSTD), recognizing that the Commission would need access to ongoing assistance and advice as it did its work in ways that were consistent with the research about and the spirit of the transformative actions. Neither the UNCSTD Gender Working Group (GWG) or the Gender Advisory Board (GAB) would have happened without Geoff.  At the time, he campaigned relentlessly, crafting and presenting the issue of gender in science and technology to the Commission, recruiting the Commissioners and Advisors, and acting as the key promoter of both the GWG and the GAB. He genuinely believed in the pressing importance of the issue and strongly urged other men to take it on board as well.

As a result of his gender work with UNCSTD, Dr. Oldham was asked to act as Gender Rapporteur for the UNESCO World Conference on Science in 1999.  Although he experienced some push-back from prominent feminists at the  conference, he worked closely with a unified initiative of women from NGOs, delegates, UNIFEM, UNESCO and other UN staff to develop a gender manifesto – Paragraph 90  of the Framework for Action adopted by the Conference – which still stands today as a landmark UN decision for women in science.  In part, it committed governments to work with UNIFEM and other UN organizations to launch a global campaign to raise awareness of the contribution of women to science and technology, in order to overcome existing gender stereotypes among scientists, policy-makers and the community at large. Geoff’s reasoning behind this was that men in policymaking positions, when presented with solid evidence and data about what he liked to call the “gender dimension of science and technology”, would, as he did, become converted to the issue and implement policies to support it.

Geoff remained as Chair of the Gender Advisory Board until 2006, and was subsequently a member of the Steering Committee of a related initiative jointly founded by the Gender Advisory Board, The World Academy of Sciences (TWAS), the Organization for Women in the Developing World (OWSD), and the Elsevier Foundation, called GenderInSITE – Gender in Science, Innovation, Technology and Engineering. He continued as a committed advocate of gender and science and technology issues until his death.

Geoff Oldham was linked to GenderInSITE from its beginning, and was a driving force of the initiative. His clear reasoning and wonderful way of expressing the importance of a gender perspective on science was always decisive at important moments of the programme and his absence will indeed leave a big void in our meetings and discussions. I had known Geoff for some time when I arrived at GenderInSITE, in early 2015, and was delighted to have him as a founding member of the Steering Committee. His passion about innovation and his insistence that GIS should develop a project that would address the issue of gender and innovation finally came to fruition this year, and although we missed Geoff in our discussion in Pretoria, at the workshop 'Gender and innovation: implications for sustainable development', the final product was certainly greatly influenced by our numerous discussions and his sharp assessment of the key issues and what should be the focus for GenderInSITE. Geoff was also a wonderful storyteller, and his long and rich life made him fantastic company in the many lunches and dinners we shared. His many friends in GenderInSITE will indeed miss him.

Geoffrey Oldham was a champion who understood that we could not move ahead to address the global challenges we face unless we use the talents and take into account the perspectives of women and men. He believed in the power of evidence to make a compelling case to policy makers. He worked tirelessly in every organization in which he was involved to advance this message.

Professor Oldham was steadfast in his advocacy and optimistic in his outlook that this viewpoint was on the right side of history. A gentleman and a gentle man, he inspired us all to persevere in our efforts to advance an agenda of inclusion. We will miss him.

Geoff Oldham will be remembered fondly by the GenderInSITE regional focal point in Southern Africa, which is hosted by the Academy of Science of South Africa. We were particularly saddened that he was not able to join us for our recent workshop in Pretoria on Gender in Innovation. This was the product of Geoff's vision and drive and we are deeply indebted to him for the initial planning discussions and for helping to shape the programme of events. Geoff's support of women's role in science was legendary and he will always be remembered for his contributions. He was a man ahead of his time.