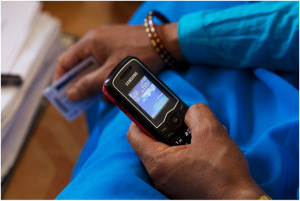 This article was written by Henrietta Miers and originally appeared on the SciDev.net Analysis blog.

A smartphone app called IFA Krishi Nepal has been designed to inform Nepali farmers about agricultural techniques, livestock disease, the weather and market prices, SciDev.Net reported earlier this month. I cannot help wondering, as I often do when I hear about new mobile technology initiatives, what this means for women.

Women make up 62 per cent of Nepal’s agricultural workforce. And as more men migrate in search of employment, women are increasingly taking on more agricultural responsibilities and decision-making — a process which many researchers refer to as ‘the feminisation of agriculture’.

Presumably, then, it is mainly these women who are the target for the smartphone app; and this is where I find a disconnect with the reality on the ground.

In low- and middle-income countries, a woman is 21 per cent less likely to own a mobile phone than a man. One survey asking participants their opinions on how to prioritise development interventions collected data via mobile phones, and found that more than three-quarters of the phone votes in Nepal came from men. In Nepal, a research paper from 2007 noted that less than 20 per cent of internet users were women (there is no recent data broken down by gender).

Reasons for what some development reports call a ‘mobile phone gender gap’ are linked to the poverty, limited mobility and cultural barriers women face, and their lower literacy rates.