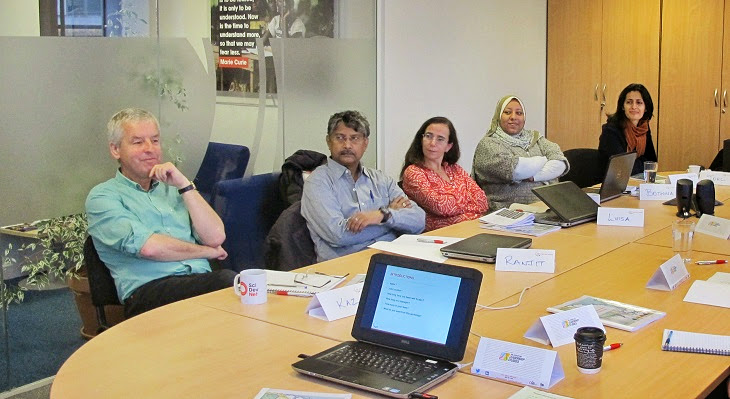 From November 25-27, 2014, GenderInSITE together with SciDev.net hosted two days of workshops in London with SciDev.net editorial staff on mainstreaming gender in science journalism and maximising gender diversity in the SciDev.net audience. Participants included  SciDev.net senior regional coordinators, assistant editors, user engagement coordinators, and freelance journalists. SciDev.net is the world’s leading online source of news about science, technology and innovation for development, widely used and valued by SITE development professionals, policymakers, and researchers. In 2012, it formed a Gender Review Group to make gender mainstreaming in its reporting an organisation-wide priority.

The workshops were organized around two separate areas of focus:

These workshops for regional coordinators and assistant editors elaborated on the importance and benefits of understanding social gender dynamics in science reporting and developed guidelines for mainstreaming gender awareness throughout the commissioning, editing and publishing process. The workshops also went beyond this and explored gender trends in science journalism opportunities, professional situations, and wider impacts.

Participants began by examining the current SciDev.net gender mainstreaming guidelines to identify what were their strengths and weaknesses and where were opportunities for improvement. They also examined case studies from various sectors of science development with relatively visible gender dimensions, such as climate change and health, as well as sectors where gendered aspects are less obvious, such as mining, transportation and construction. Specific examples of stories in these areas were worked through to see how a gender lens might be better applied.  The workshops also identified best practices in pitching stories with a gender lens, and discussed suggestions for content analysis and other tools to assess gender balance in science journalism.

As important as it is to include a gender lens in the message of media, it is also important that the information presented is accessible to and utilized by both men and women. This second set of workshops for user engagement professionals discussed  ways to maximise gender diversity in science journalism audiences and developed guidelines on how to attract, reach, and maintain female readers and contributors to science journalism. Participants discussed how framing, language and image choice, and strategic user engagement, among other practices can help science communicators achieve gender diversity among their readers. They identified specific networks to help them reach women in particular, as well as worked through a communications strategy using transportation as a specific example.

Feedback from participants in the workshops was very positive, with responses to a post-workshop survey indicating that they came away from the sessions with a greater understanding of the importance of applying a gender lens in their work as well as greater confidence in how to practically apply this lens. Said one participant, “Both as a journalist and a user engagement coordinator, I see this awareness raising as crucial. It will help me look for new and unique angles into the stories that matter and has made me more aware of how I communicate across all mediums.”

The outcomes of the workshops were used by SciDev.net in preparing a number of follow-on activities to promote gender mainstreaming both internally and to other communicators and networks. These include the collection of sex-disaggregated on mode of access by readers (i.e. mobile vs computer), publication of a practical guide on how to mainstream gender into science journalism to share best practice to a wide audience, and creation of an online course for wider use, by modifying resources from the workshops.

Download below the full report from the SciDev.net-GenderINSITE workshops on Mainstreaming Gender into Science Journalism and Maximising Diversity in Readership [PDF].

The practical guide, ‘How to Consider Gender In Science Reporting‘, was published online by SciDev.net on March 5. It was written in collaboration with gender experts from GenderInSITE and non-profit organization Portia as well as external science communication experts.