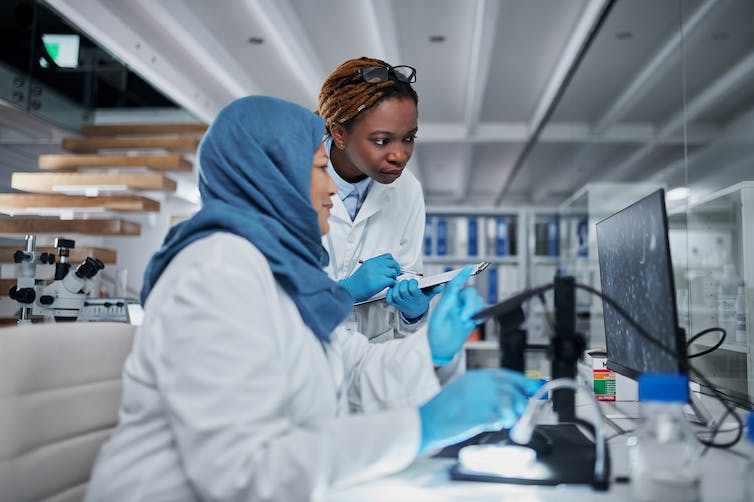 Women have a valuable role to play across scientific disciplines - but can’t do this without proper support. Katleho Seisa/Getty Images

Women remain under-represented in science careers and research all over the world. There are several reasons for this, including stereotypes about what kind of work women “can” or “should” do; patriarchal attitudes; and a lack of support for women pursuing science, technology, engineering and maths (STEM) careers.

This isn’t just an abstract concern. Gender equality matters for many sound reasons. For one, it’s enshrined in international human rights law and it is one of the Sustainable Development Goals.

It also makes good economic sense for countries to invest in and fully utilise their total populations. Inclusive scientific leadership in which women are equally represented is best suited to the needs of modern society. Plus, valuing diversity and multiple perspectives sparks creativity and innovation. Both are important hallmarks of scientific endeavour.

So, how are the world’s science academies and international disciplinary associations doing when it comes to getting – and keeping – women on board as members and leaders. That’s what we set out to examine in our new study. We focused on science academies and disciplinary unions because together, these organisations represent a large proportion of global scientific endeavour. They have the potential to be powerful change-makers and leaders.

The study followed a 2015 survey on gender inclusion in academies. This allowed us to pinpoint whether and how academies had made any progress in certain areas. There were some encouraging findings: for example, women’s membership of academies increased from 13% to 17% and women’s leadership on governing bodies from 21% to 29%. Young academies, which generally represent early career scientists, fared far better than their senior counterparts, which is a promising sign for the future.

But there’s still plenty for young academies to do. Most still have less than a quarter women’s representation, though there was one bright spot: South Africa’s Young Academy of Science is ranked highest in the world when it comes to female membership; 57% of its members are women.

The report sets out several recommendations for furthering gender representation and equality globally. These include developing and maintaining a central repository of gender-related policies and actions as well as working intensively with disciplinary associations where improvement is needed in women’s representation.

The study was coordinated by GenderInSITE (Gender in Science, Innovation, Technology and Engineering), an initiative aimed at promoting the role of women in these disciplines and demonstrating how the application of a “gender lens” leads to more effective, equitable and sustainable development. It was a collaboration with the InterAcademy Partnership and the International Science Council.

The academies and disciplinary organisations surveyed are all members of the InterAcademy Partnership or the International Science Council. In total, they represent more than 250 unique organisations. That means the results we collected provide important baseline information for taking transformative action at a global level.

Here are some of the key findings:

We also found a big divide between actions and words. For instance, 68% of international disciplinary organisations said they were committed to diversity and inclusivity. But only 32% said they were taking action by, for instance, developing policies that would drive diversity and inclusion. Only 16% of these organisations reported that they had a budget for activities related to gender equality.

One of our most disappointing findings was that only six science academies of the 72 that participated last time discussed the 2015 survey report and its recommendations at a strategic planning session. This has prompted us to recommend that the IAP and ISC establish centralised monitoring and evaluation frameworks that require regular reporting of gender statistics by their member organisations.

The new survey contains a number of recommendations, which GenderInSITE, the InterAcademy Partnership and the International Science Council are committed to taking forward.

One of our next steps is to extend the survey to other global science organisations. This will contribute to a more inclusive and comprehensive understanding of gender equality in global science. The report also recommends developing and maintaining a central repository of gender-related policies and actions as a way of encouraging those organisations committed to gender transformation to learn from best practice examples.

GenderInSITE, the InterAcademy Partnership and the International Science Council have all committed to using their regional presences to gain insights and advance the gender equality agenda. This is especially so in countries or regions that are lagging. The same sort of work will be undertaken in disciplines that have been found wanting in terms of women’s representation.

Our three organisations will also establish centralised monitoring and evaluation frameworks that require regular reporting of relevant gender statistics by our member organisations. This reporting will happen at a high strategic level. In this way, we hope that gender transformation is prioritised.

It’s also important to note that we’re not merely focusing on numbers, since these are only part of the picture. Science academies and disciplinary organisations are also being encouraged to focus on making diversity and inclusion central to their institutional cultures.

This article is republished from The Conversation under a Creative Commons license. Read the original article.