Professor Boccia presented an introduction to the New Urban Agenda, and located key sections pertaining to gender in the document. She went on to discuss key progress points made since the NUA was drawn up in 2016, up to the present day, with an appropriate focus on the Latin American and Caribbean Regions. She praised the commitment of women’s groups to the implementation of the NUA, especially through grassroots organisations, as well as through universities and NGOs. She then went on to make four key recommendations for the next steps of the implementation of the NUA: 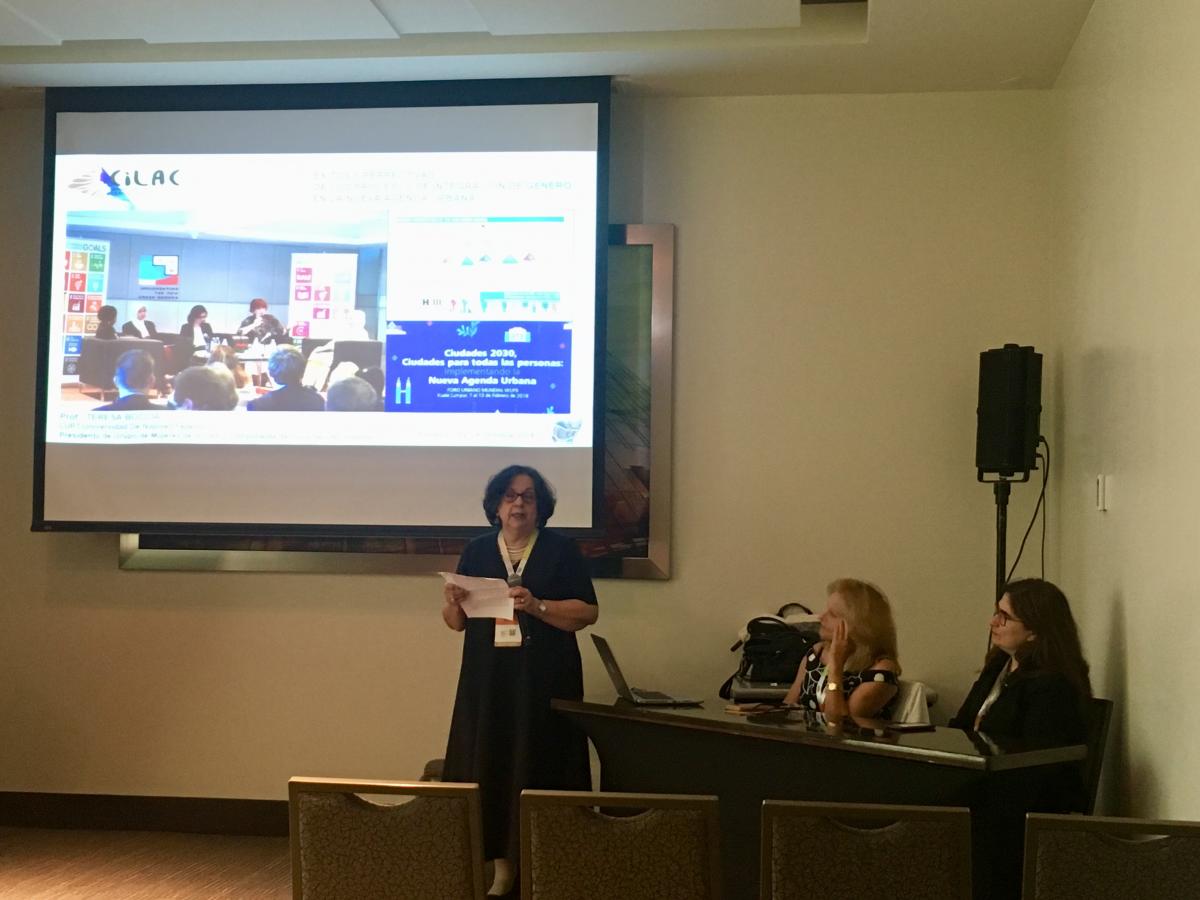 Professor Madariaga followed with a presentation which opened with an exploration of the breadth of the issue: urban planning comprises questions of architecture, housing, transport, urban services, science, technology, climate change, and more. Focusing initially on the needs that women in particular have from the city because of daily care activities, she pointed out the implicit gender bias in the different domains of city planning. For instance, the widespread assumption that housing is for leisure only; since women globally take on the vast majority of caring responsibilities and other household work, these assumptions often do not take into consideration women's realities and needs in neighborhoods. Similarly, traditional data collection neglects the commonality of care‐related transportation usage. When using the concept “mobility of care”, coined by Professor Madariaga in 2009, analysis of urban mobility patterns in the city of Madrid among persons aged 30-45 sees care-related activities come up as the second main purpose for travel.

Professor Madariaga presented the case of the Madrid Nuevo Norte, one of the main projects for urban regeneration currently in process in Europe involving the construction of over 10,000 new housing units, several new subway stations, a new main train station, a new Central Business District, and many new facilities and infrastructures. Madrid Nuevo Norte involves the redevelopment of a very significant stretch of vacant and underused urban space in a very central location around Chamartín train station in Northern Madrid, a few minutes away from the airport. Her work on this project as a gender consultant involved the introduction of a number of measures and design solutions aiming at addressing gender dimensions and the specific needs of women. Her work also included drafting the Gender Impact Statement of the whole redevelopment proposal, a technical document required by Spanish legislation which has only recently been implemented in Spain's planning practice. In fact, her work for this Gender Impact Statement is a pioneering document which has involved the development of a specific methodology for the analysis of gender impacts in urban development planning.

Professor Madariaga also presented her work for the Regional Plan of the Basque Country for which she contributed the gender component. This is a major planning document involving the whole of the Basque territory – three capitals, many smaller cities and the remaining rural and natural areas of the region – which is drafted and adopted every twenty years. This plan involves both compulsory and non-compulsory elements for municipal planning, and is to be developed both through municipal plans, and through thematic and territorial plans. The gender component involves groups of measures for twenty-five areas of planning, spread within four of the eight themes addressed by the Regional Plan. The four areas in which the gender measures are proposed are the following: city planning, rural planning, transportation planning, and governance. In addition to this, the gender component involves a number of cross-cutting recommendations including:

Professor Abreu opened the floor to questions, and a lively, productive discussion ensued, with an emphasis on the ways in which transformation using a gender lens as benefits everyone, not only women.