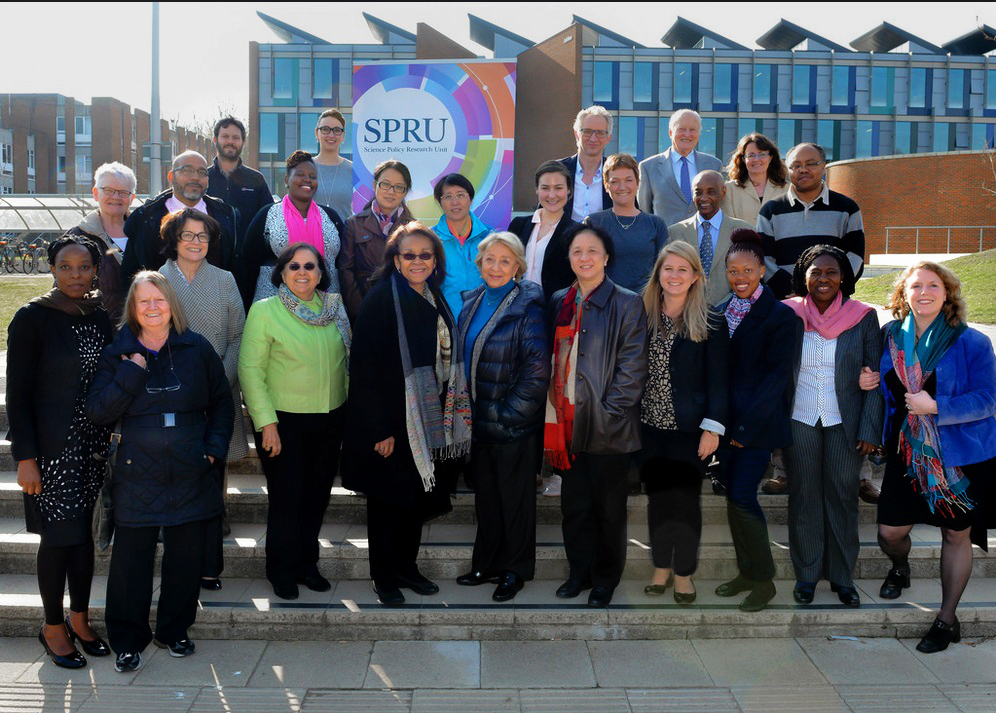 On 23-24 March, GenderInSITE and the Science Policy Research Unit (SPRU) at the University of Sussex together hosted a workshop at the University on Exploring the Knowledge and Innovation Policy Interface and its Gender Dimension. The workshop brought together policymakers, policy researchers, gender advocates and other stakeholders from national and international organizations to discuss the ways in which policymakers access and use knowledge, and how this can advise the strategies of those who seek to influence them, specifically with respect to gender in science and technology policies.

In a series of sessions on the first day of the workshop, participants shared insights from their own experiences in working with policymakers and existing policymaking tools, as well as evidence from an examination of policymaking bodies worldwide conducted by former Director of SPRU Geoffrey Oldham, also a member of the Gender Advisory Board to the UN Advisory Commission on Science and Technology for Development. The second day of the workshop continued with a discussion on how to influence decision makers in other sectors outside of government.

There was a strong consensus among workshop participants on the importance of finding ways to mainstream gender in science and technology policy. Co-Chair Shirley Malcom of AAAS emphasized in her opening remarks the value of diverse perspectives and ways of thinking at all stages of scientific research, from funding allocation to research design, methodology and application, as well as in the policy sphere.

Over the course of the two days, a number of themes seemed to emerge from the presentations and discussions:

SPRU Director Johan Schot opened the workshop by emphasizing the importance of properly framing an issue—illustrating how it fits into a broader context of other policy priorities and concerns. In the case of gender in science and technology for development, this might mean drawing attention to the economic benefits of building a more diverse S&T workforce, or highlighting women’s unique capacity to mitigate certain effects of climate change. Gloria Bonder, UNESCO Regional Chair on Women, Science and Technology in Latin America and the Caribbean, expanded on this point in a later panel, stressing that an understanding of the social, political, and cultural contexts in which policies are implemented is also needed, and that recognizing when to build on momentum can be critical.

This point was acknowledged as being of particular importance to GenderInSITE, as the gender dimensions of many SITE and SITE-for-development policies may not be readily apparent to policymakers. Concrete examples of the ways in which gender intersects with these issues must be presented clearly; Alice Abreu, Emeritus Professor of the Federal University of Rio de Janeiro, Brazil, and recently appointed as Acting Director of GenderInSITE, stressed that these examples should also be relevant in policymakers’ local contexts for them to have the strongest impact

A message that was heard repeatedly during the workshop was the need to go beyond targeting policymakers directly to reaching knowledge brokers: journalists and other communicators; policy think tanks; NGOs and advocacy groups; and particularly in the case of GenderInSITE, science academies can be useful allies in synthesizing raw information into a form that is more easily utilized by decision makers. Policymakers and other high-level decision makers want expertise and guidance – they are interested not in raw data, but in the implications of that data for their policy area.

Groups who wish to serve in the knowledge broker role themselves must establish themselves as independent, trustworthy and authoritative sources of knowledge. Transparency is critical, as is the packaging of information—it must be clear to policymakers and other stakeholders what kinds of information and services knowledge brokers provide, and how they can be accessed. Melissa Leach, Director of the Institute of Development Studies at the University of Sussex, also spoke about the growing capacities for open knowledge and digital innovation in making effective knowledge and evidence accessible.

Several workshop participants expressed that it is important to think about policy change not as a linear process, but as a product of a complex network of interrelated actors and forces. There may therefore be places within this network where existing momentum can be seized or where other opportunities can be leveraged. Nick Perkins, Director of SciDev.net, encouraged moving away from the idea of a “silver bullet,” and instead focusing on small, individual actions that influence various spaces within this network. Shirley Malcom echoed this idea, pointing out that if change takes place within a system, any individual point within this system can be taken as a fulcrum for change.

An issue that arose several times throughout the discussions was the importance of intersectionality in collecting and analyzing data on gender or any other issue. Gender is acknowledged to be closely interrelated with socioeconomic, cultural, racial and other demographic variables, but not until we have disaggregated data on these demographics can we begin to understand in an empirical sense how they relate. Collecting highly granular data is cost- and labor-intensive, but as Shirley Malcom pointed out, by ignoring the issue of intersectionality “we are in a sense fooling ourselves.”

The insights gained from this workshop were used in preparing a GenderInSITE policy strategy for 2015-2016. This strategy will provide a framework for GenderInSITE’s approach to making SITE and SITE-for-development policymakers aware of the gender dimensions of these issues.

The policy workshop was felt by both GenderInSITE and SPRU participants to be extremely effective in illuminating the intersections between science policy and gender, and all expressed a strong commitment to continuing to work together to mainstream gender in SITE.

The list of participants and full program for this workshop can be downloaded below.

Following the close of the official policy workshop on Tuesday, 24 March, participants took part in an additional interactive event, International Approaches to Support Gender Equality in Research Careers, organized by Ralitsa Hiteva of SPRU. This workshop, aimed at postdoctoral research staff, early career academic faculty and final year PhDs at the University of Sussex, facilitated a discussion around the role of academic institutions in supporting gender equality, from providing skill-specific training to female faculty and staff members to assessing how systemic change can benefit women. A number of recommendations for integrating gender into institutional and knowledge infrastructures emerged from this discussion, including good practices for embedding gender equality at the department level and moving beyond mentorship to more active sponsorship of younger researchers. For a more complete summary of this event, see Dr. Hiteva’s write-up on the SPRU Sussex Energy Group’s blog.