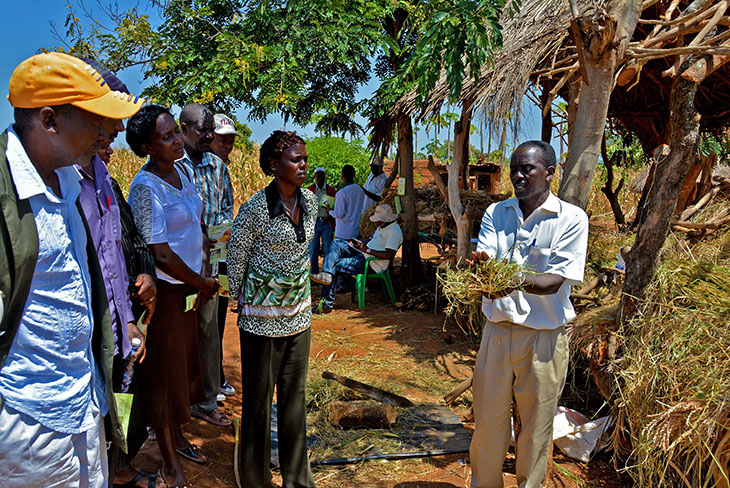 In the rural villages of East Africa surrounding Lake Victoria, a combination of innovative agricultural technology and gender-inclusive extension practices is engendering a quiet but steady transformation in women’s social and economic standing. In a region where men have traditionally controlled land, decision-making power, educational resources and other assets, women in the large majority of households that rely on smallholder farming have been limited in their capacities to improve their own economically viable knowledge and skills. Relegated to the most time- and labor-intensive activities such as pulling weeds and digging crops, women have rarely had the opportunity to advance beyond subsistence-level crop farming. With advances in agricultural science that shorten the amount of time demanded by these activities, however, an increasing number of women, as well as men, are able to devote fewer hours to ensuring basic food security for their families and more to other economic activities such as expanding into for-profit crop and livestock farming, operating small enterprises, or entering into professions such as education or healthcare.

Farmers in these regions have historically faced a number of challenges in growing adequate crops to feed their families and provide a source of income. The cereal crops such as maize and sorghum on which their livelihoods depend are vulnerable to insects, parasitic weeds, drought and other climatic events. Since 1997, agricultural scientist Dr. Zeyaur Khan and other researchers at the International Center of Insect Physiology and Ecology (icipe) have worked toward the development of a farming technology known as push-pull that specifically reduces two of the most damaging burdens—the stemborer insect and the parasitic striga weed. The technology, which was developed in collaboration with the UK-based Rothamsted Research institution and other national partners, produces dramatic increases in crop yield and soil productivity and prevents erosion. It works by interspersing cereal crops with stemborer-repellant desmodium plants – the push component of the model – while simultaneously pulling stemborers away with a surrounding border of Napier or drought-resistant Brachiara grasses that emit chemicals that attract the pests. Other chemicals from the desmodium plants stifle the growth of the striga weed by suppressing growth of the weed’s roots.

Extension of the push-pull method has relied on educating farmers in basic agroecological science and on equipping them with the tools they need to act as ambassadors for push-pull in their wider communities. From the beginning, icipe scientists and staff have made a conscious effort to include women in the dissemination of the push-pull method, specifically targeting women’s groups and women heads-of-household where possible, and working with both men and women in more traditional households to make sure skill sets are more evenly distributed between genders. Their efforts have had widely resounding effects. At the most basic level, women farmers who adopt push-pull enjoy greater food security and economic stability; cereal crops in this region are often bartered or traded for other goods and services. This frees women to pursue opportunities outside of their family farms and establish their own economic means of support. By securing their own sources of income and becoming local experts on push-pull technology, women also achieve positions of greater authority and respect within their households and communities. They may assume positions as primary breadwinners or gain more influence over household decisions. Enabling women to build careers and livelihoods beyond the farm is an important step in building their self-confidence, social networks, business acumen and other skills that serve to further empower them. Many of the women whom Khan and his colleagues have trained in push-pull go on to educate others in the technology, and some have gone on to take part in further exploratory agricultural extension practices such as participatory video to reach non-literate farmers, become experts in other areas of agricultural science or agricultural policy, or apply their newfound leadership skills in other areas such as healthcare or religion. Families and community groups also use push-pull to generate surplus income which is used to support the tuition and other costs of education for children, particularly girls, who are often otherwise excluded from opportunities for secondary and higher education due to constraints on financial resources.

Khan and the rest of the icipe program team, along with the women who have benefited from adopting the push-pull technology, are contributing to gradual but fundamental changes in the way women’s and men’s roles are understood in the Lake Victoria region and in the quality of opportunities available to women in particular. In many communities, cooperative women’s groups provide a forum for collective learning and sharing of push-pull technology and best practices which allows even those without landholding or other resources of their own to gain valuable knowledge and experience with the underlying concepts. As icipe continues its emphasis on gender-inclusive education and training while it works to disseminate its technologies, it hopes to contribute to the expansion of opportunities for women more broadly, including by encouraging women to enter agricultural and scientific careers.